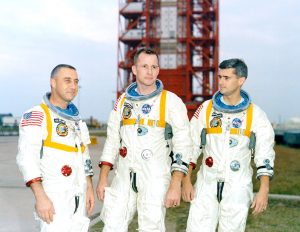 Remembering the disaster of the Apollo One fire; learning about beer yoga; & the latest Book Banter

NASA expert Rod Pyle, author of Amazing Stories of the Space Age, looks back at the tragedy that was the Apollo One launch pad fire of 50 years ago, killing astronauts, Gus Grissom, Ed White and Roger Chaffee.

(You can also check out the recent story by Kaleigh Rogers, whose grandfather, Henry Rogers, was working as a NASA quality control inspector on that fateful day. The story was originally posted on the Motherboard page which is one of the Vice channels online).

Mikki Trowbridge has been doing something a little different when it comes to teaching yoga. She has classes that take place at a brewery called Beer Yoga.

Stuart Nulman is in with another edition of Book Banter. This week we turn the pages on Settle for More

written by Megyn Kelly, (Harper, $36.99).  You can also read Stuart’s reviews in The Montreal Times.

This week’s opening slate is presented by Bart King, author of the Disney novel, The Drake Equation