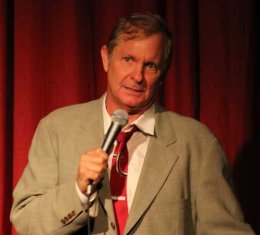 Featuring comic Ritch Shydner, author of Kicking Through The Ashes; franchise expert,Tom Scarda on the one-year anniversary of McDonald’s all day breakfast; and Peter Franklin, the Gabby Cabby, shares a slice of the Big Apple from his yellow mobile conveyance lounge

The 1980’s saw an explosion of stand-up comedy and Ritch Shydner was at ground zero, with other young comics such as Jay Leno, Jerry Seinfeld, Roseanne Barr and Tim Allen.  Now he has written a book sharing his experiences during those wild times called Kicking Through The Ashes.

Last week was the one year anniversary of the very successful McDonald’s All-Day Breakfast menu in the United States. Franchise expert, Tom Scarda, shares some of the reasons for their success. He’s the author of Franchise Savvy: 6 Strategies Pros Use to Pick Top Performing Franchises.

Peter Franklin, the Gabby Cabby, is in New York to share a slice of the Big Apple from his yellow mobile conveyance lounge.

This week’s opening slate is presented by voice over artist, broadcaster and former co-worker, Rob Wreford